Virtually every household in the Gaza Strip depends on batteries to run their homes, the result of years of chronic power cuts.

These batteries, powering everything from lights to internet routers to solar panels, helped alleviate a crisis. But they cause another as huge mounds of old and used batteries pile up in a territory unable to dispose of them safely.

“There is a real danger that these batteries will be randomly collected and stored in the open; not in warehouses,” said Mohammed Musleh, an official with the Gaza Environment Authority.

The most pressing threat, he said, is that “the batteries break and ooze a liquid that includes sulfuric acid and seeps into the ground and then into the aquifer.”

The Gaza Environment Authority estimates that there are 25,000 tons of old batteries piled up in several places on the tiny and overcrowded coastal territory. There are no recycling facilities in Gaza and a blockade imposed by Egypt and Israel to thwart the smuggling of weapons or items that could be used to make weapons – terror groups in Gaza often fire rockets on civilians in southern Israel – prevents shipment of batteries overseas safe disposal.

According to the United States Environmental Protection Agency, used batteries create a number of risks to public health and the environment. Different types of batteries contain potentially dangerous types of metals such as mercury, lead, and cadmium, while some can ignite.

These risks are particularly acute in Gaza, where the health system has been ravaged by years of conflict and lack of funds and where the environment is already in a sorry state. Almost all of Gaza’s water is undrinkable due to high levels of salinity caused by over-extraction.

Israel bombed Gaza’s only power plant in a series of battles in 2006 and imposed a blockade with Egypt the following year after the terror group Hamas seized power in the Strip. The result: a daily blackout of at least eight hours, punctuated by longer interruptions that can last for days during winter storms or conflicts.

This has made batteries an integral part of daily life for the territory’s 2 million people.

The Gaza City Municipality has a hazardous waste unit to safely dispose of old batteries. But Ahmed Abu Abdu, head of the unit, says very few batteries reach him. Instead, a small private industry sprung up.

Every day, collectors in cars or donkey carts criss-cross Gaza, calling over loudspeakers for people wishing to sell old batteries. Depending on their size, old batteries can fetch up to $2 each.

Khaled Ayyad is one of dozens of dealers who buy the old batteries. For eight years, he collected and stored them in a warehouse in northern Gaza. Ayyad has one goal in mind: to export the batteries and make a decent profit. 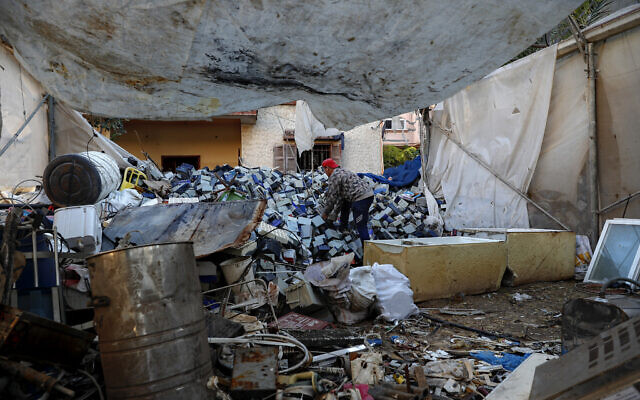 A Palestinian worker searches for batteries among other electrical waste at a warehouse in Jebaliya, Gaza Strip, December 15, 2021. (AP Photo/Adel Hana)

“As the Israeli side allows [batteries] in Gaza, he must let them out,” he said. “We can sell them to factories in Israel, European countries and all over the world.”

But the export of batteries is still prohibited, and Ayyad faces a new dilemma: he has about 500 tons of batteries accumulated in the warehouse. He can’t resell, export or throw them away, and he pays storage fees. Thus, he has a message to Hamas: “We call on the leaders of Gaza to talk to the Egyptian side to allow us to export them there.

There is a precedent. Hamas and Egypt have strengthened their business cooperation in recent years through a crossing point in the border town of Rafah. The crossing point is mainly used to deliver goods such as building materials, fuel and tobacco products to Gaza. But it was also used to ship scrap metal to Egypt.

While Ayyad’s warehouse has a concrete floor, most other storage locations are outdoors, risking spilling hazardous materials directly into the ground.

No studies have been conducted on the threat to the environment, but research in 2013 by a Gazan neurologist and an environmental science expert warned that the children of people handling used batteries showed “different degrees of of poisoning due to lead exposure.

Trying to reduce the danger, Hamas authorities have banned the import of used batteries since 2017.

The Gaza-based al-Mezan Center for Human Rights, which in 2018 published a report warning of the threat from the batteries, said the danger was “far reaching”.

“There is a problem,” said Hussein Hammad of the rights group. “Here the batteries started to affect human rights: the right to health, the right to a healthy environment and the right to life.”

Times of Israel staff contributed to this report.

If so, we have a request.

Every day, our journalists aim to keep you up to date with the most important developments that deserve your attention. Millions of people rely on ToI for fast, fair and free coverage of Israel and the Jewish world.

We care about Israel – and we know you do too. So today we have a question: show your appreciation for our work by join the Times of Israel communityan exclusive group for readers like you who appreciate and financially support our work.

You are a dedicated reader

We’re really glad you read X Articles from The Times of Israel over the past month.

That’s why we started The Times of Israel ten years ago – to provide discerning readers like you with must-read coverage of Israel and the Jewish world.

So now we have a request. Unlike other media, we don’t have a paywall in place. But since the journalism we do is expensive, we invite readers to whom The Times of Israel has become important to help support our work by joining The Times of Israel community.

For just $6 a month, you can help support our quality journalism while benefiting from The Times of Israel WITHOUT ADVERTISINGas well as access Exclusive content only available to members of the Times of Israel community.

Thank you,
David Horovitz, founding editor of The Times of Israel